Danielle
Baton Rouge, LA, United States
I'm a doctoral student specializing in children's literature. I spend a lot of time reading and possibly even more time avoiding reading. I suck like that.

Stuff I Made This Week

So, as I mention in the subtitle and in my first entry, I’m kind of into the whole home ec thing (as long as there’s no cleaning involved; John does the dishes). So I thought, to explain what I mean, I’d make a list of stuff I’ve made in the past week or so: 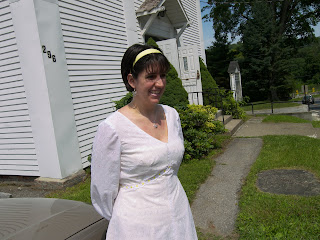 This shows some of the detail on the bodice. 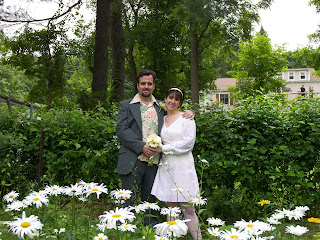 And this shows the length and the way in which the dress went with the other outfits at our wedding, which was '70s-themed.

Sometime soon, I’ll also have to do a couple loaves of Honey Whole-Wheat bread because I took the last loaf out of the freezer today. And last week, I also did a project based on this project at Sew Green. Fair warning: this is a Lady Project, for Ladies. Also fair warning, after I assembley-line-stitched 8 of this pattern, spending a whole afternoon and evening, I discovered that I wasn’t really that happy with the pattern and re-designed it on my own. So, I’m down with the idea over at Sew Green, but the execution, for me anyway, required some fine-tuning. Anyone else out there working on anything projecty?
Posted by Danielle at 11:12 AM